In light of this new Avandia information, the FDA has asked that a black box warning label be added to Avandia to communicate the serious life threatening risks associated with this diabetes drug.  A black box warning is the strongest caution a drug can bear, short of the drug being pulled from the market. 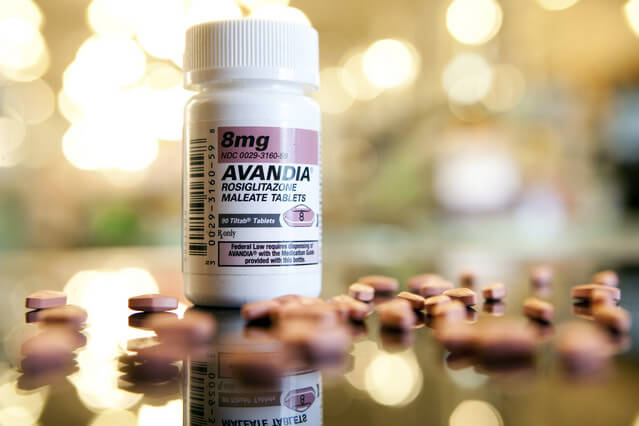 Over six million people worldwide have taken Avandia, a drug that brings in over $3 billion in sales annually.  Avandia (generic name rosiglitazone), marketed by GlaxoSmithKline, was approved in 1999 to treat type-2 diabetes.  Type-2 diabetes is characterized by elevated blood glucose levels caused by the body’s inability to properly use insulin.  Left untreated, adult-onset diabetes mellitus can lead to kidney problems, nerve damage, blindness, and cardiovascular disease.

Several experts, including lawmakers, health care professionals, and Avandia lawyers have accused GlaxoSmithKline of failing to warn diabetics that Avandia can increase the risk of heart attacks. Others have also criticized the FDA for failing to warn patients and doctors about these serious Avandia side effect risks.

Experts Worried About Avandia Side Effects for Years

While recent studies have stirred renewed concern over Avandia side effects, some experts began voicing apprehension over the cardiovascular safety of Avandia as soon as the drug hit the market. Dr. John Buse, endocrinologist and incoming president of the American Diabetes Association, voiced concern about Avandia heart side effects as early as 1999.

When Buse spoke out publicly about his concerns, he was met with threats from the drug’s maker, who accused him of causing the company a loss in market capitalization.  No effort was made on the part of Avandia’s maker to further investigate these alleged Avandia heart risks, nor did the company take any action to warn patients about these potential risks.

Drug makers have a legal responsibility to inform patients about all possible risks associated with their product. Failure to do so can result in legal action taken by those who have suffered damages caused by dangerous drugs.  Thus, patients who have been injured by Avandia may have the legal right to seek compensation from the drug’s maker for all present and future damages caused by Avandia. To learn more about an Avandia lawsuit, please contact us to speak with a qualified Avandia attorney who can evaluate your case to determine the best way to help you.

Several lawmakers and other experts have criticized the FDA to failing to adequately respond to the risks associated with Avandia.  Last year, FDA drug safety supervisor Dr. Rosemary Johann-Liang warned the agency that Avandia carried significant heart risks.  She argued then for the addition of a black box warning to Avandia, but her concerns were not taken seriously. Instead, she was reprimanded for speaking out about Avandia side effect risks.

For several years, experts have known that Avandia increases the risk of congestive heart failure. This is a serious risk because diabetes itself puts patients at an increased risk of heart problems, with approximately 65 percent of all type-2 diabetes deaths the result of cardiovascular complications.

As a result of this new evidence, the FDA has called for the addition of a black box warning on Avandia to warn of heart attack risks.  This request was made during House hearings convened to assess the FDA’s questionable handling of Avandia.

The FDA is currently conducting a comprehensive investigation to further assess these Avandia risks.  An interim analysis of the RECORD Avandia study showed that the drug does increase cardiovascular risks but has not found the relationship between Avandia and heart attack to be as strong as the Nissen study indicated. However, three editorials accompanying this interim report in the New England Journal of Medicine said that the report does not dispel concerns over Avandia heart attack risks, pointing to weaknesses in this study.

At this point it is unclear whether the FDA will take additional regulatory action regarding Avandia. Some experts believe an Avandia recall is a possibility, should additional evidence confirm Avandia heart attack risks.  Some people are comparing Avandia to once-popular arthritis drug Vioxx.

Avandia and the Law

At least three complaints have already been filed against the makers of Avandia by those who have suffered heart attacks and other physical and emotional damages caused by Avandia side effects. One of these complaints is a national Avandia class action lawsuit accusing GlaxoSmithKline of failing to warn diabetics that Avandia increases the risk of heart attacks.

Are you Taking Avandia?

If you or a loved one is taking Avandia, it is important to speak with your health care provider before making any changes to your treatment regiment.  Together, you and your doctor can discuss the best and safest treatment for you, given the risks and benefits of taking Avandia medication.

If you or a loved one has suffered a serious injury while taking Avandia, you may be able to seek compensation for your losses and suffering.  To learn more about Avandia legal action, please contact our qualified and experienced Avandia attorneys who can evaluate your case and determine the best course of action for you.